Nope, that little grey Subaru isn’t racing around on a snow packed parking lot.  Last time I was out at the Bonneville Salt Flats it was a grey day, but I still had fun.

Watching the cars racing around out there.  It wasn’t during the official races at the flats, but I’d bet most weekends you can find someone out there just pushing their car to it’s limits.

Of course you have to take into account that the underside of your car is going to be crusted with salt when you’re done.  Salt and cars don’t mix too well, gotta make sure you thoroughly clean the underside afterwards.

The chair dominated the small room.

“Quit horsing around,” he commanded from the chair, “we have a lot to accomplish in this short meeting.”

Three hours later, the weary committee members were allowed to leave the room.  The chairperson looked at the one remaining member and said “It may have taken a lot longer, but this group sure knows how to have fun getting stuff done.”

Spewed forth by Max Sartin at 10:53:00 AM 15 backlashes Ideas: Big Chair, Saturday Centus

Spring had sprung. For a day.

Got out of school, rolled down the windows and drove home.  Got home, saw the outdoor thermometer, February 22nd and it’s 60° out there,

and I opened the windows to air out the house.

Winter is not my favorite season.  It’s cold.  Daylight is limited.  The house is all shuttered up and feels stale.

Spring is great, open the house air it out, days are longer and the temperature is all but perfect.

Summer is wonderful.  The swamp cooler runs 24/7.  The daylight is long and makes it almost to 10 PM.  Night temperatures are wonderful.

I love fall, except for it being the harbinger of winter.

But at least it is common in Utah to occasionally get these nice warm days during the winter so I can air out the house.

Utah’s own Spiral Jetty.  Robert Smithson built it back in 1970, when The Great Salt Lake was at a low level, so it has spent about half it’s time submerged under water, depending on the lake level.

The Great Salt Lake has no outlet, it only loses water to evaporation, which is why it is so salty.  That also means that it’s level is highly dependent on the weather.  In the early 80’s they had to rebuild I-80 several times because the lake kept rising and covering it.

Here was a smaller rendition of it, or maybe some other form, that was made of rocks on the shore above the Jetty.

The Jetty is up on the north shore of the Great Salt Lake, just a few miles down a dirt road from Promontory Point, where the eastern railroad was first connected to the western railroads.  Writer and I went to see the reenactment there first, before venturing out to the Jetty.  There’s a lot of curves on a locomotive.

Got up this morning and it was a little bit chilly out.

But I decided to go out and get some pictures of the Westminster construction, despite the cold, because of the new snow.

Then I went over to the park and saw the hill alive with sledders,

and the “High Water” sign still up, despite the level being well below normal.

I noticed the Animal Control vehicles driving around the park and finally meeting up in front of the pond.

I was hooked, curious about what was going on.  I watched as one guy grabbed a net and headed out to the center of the pond with a police officer.  The officer remained on solid ground,

while the animal control guy waded out into the muck and water, coming real close to slipping and falling a couple of times.

He reached out and scooped up a dead duck,

headed back to solid ground,

met up with the police officer,

and headed back to the vehicles.

What the deal with the dead duck was, I have no idea.  Why it took 3 Animal Control vehicles and one Police Officer, I don’t know.  I was freezing by this time, so I just headed home.

And saw this idiot driving up 1300 East on the way.

Seriously, dude.  You could have spent the extra 60 seconds and cleaned off your back window, it wouldn’t have killed you.

And I still have tomorrow off from school.  Nice day.

I’ve seen a bunch of these “What _____ thinks” thingies, some of them are pretty funny.  This one hits home for me.

Spewed forth by Max Sartin at 6:28:00 AM 5 backlashes Ideas: Facebook, funny, Teaching

I’ve been reading Karen’s entries over at her blog for a while and decided to try out this week’s:  Autobriefagraphical.

The rules are simple: I have to write an autobiography in exactly six words.  A picture is allowed, which of course I’m going to have one.  If you want to see more, or join in too, just click HERE.

MAKE PEOPLE LAUGH,
INSTEAD OF SAD.

My parents didn’t give me or my siblings middle names.  I got mine when, at 13, I applied for my Social Security card and on the application it asked for my legal name, and then asked for my working name.

My little brother (Mr. Gearhead) and I took the day to renew our licenses.  We had heard horror stories about renewing since they changed the laws a couple years back, hours waiting, several trips to get the right documentation, etc., etc.

To renew your license you need your old license, birth certificate, Social Security card and (if you have moved) two pieces of mail proving your new address.  Letters from friends don’t count, they have to be bills.

Neither of us have moved in the last 5 years, we brought all the proper documentation, showed up in the parking lot at 9:49 and got back in the car at 10:29.  Both times were AM, both on the same day.

Since I have another 5 years before I have to go through that again, I’ll tell you the secret.  DON’T go to the West Valley offices.  They are more central to the valley, so they are a lot busier.

All went smooth, except that I lost my middle name.  According to the new laws, my license must reflect my name exactly as it appears on my birth certificate.  No exceptions, even if it is just a middle initial and the Federal Government has accepted it and put it on my Social Security records.

I’m ok with that, although I would have liked to keep it.  It’s just that I’m not sure what’s going to happen if I ever need to get something notarized and my documentation and signature don’t match my driver’s license.

Intentional asshole, oblivious asshole, blind as a bat or dumb as a rock?

These people drove up to one of our pumps, bought nothing at all and spent 20 minutes cleaning their car, including the windows inside and out.  The could have at least made their garbage into the trash bin.

An amazing amount of people leave their trash right on top of the pumps or right above where it says “TRASH Push Here”.  Even worse is when I find trash inside the window washer fluid buckets.  Today I had to refill one that had orange rind floating in it.  Now that I know was someone purposely being a jerk.  Makes me wonder if they really get off on the thought that someone is going to think “What an ass” as they clean it out.

Ahh, the human race.  Not as civilized as we like to believe.

I got a rose for Valentine’s Day today.

From the love of my life?  No.

From the future love of my life?  No.

Nope, I got one from a student, and here‘s what the card said: 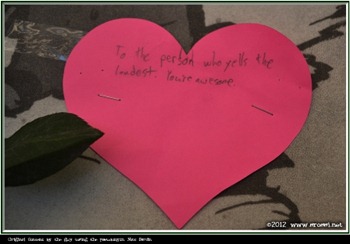 Yeah, what a wonderful holiday.

Here is my pair.  I took these pictures on a visit back to my grandparent’s in the mid 80’s, long before we could even imagine the New York skyline without them.  It’s been over a decade now, and somehow the skyline still looks wrong.

Made me laugh.  Out loud.

Spewed forth by Max Sartin at 12:04:00 AM 4 backlashes Ideas: Facebook, funny