“Twenty fathoms under in a milky green light the spectral cabins, the skeleton cottonwoods, the ghostly gas pumps of Hite, Utah glow dimly through the underwater mist, outlines and edges softened by the cumulative blur of settling silt.  Hite has been submerged by Lake Powell for many years now, but Smith will not grant recognition to alien powers.”  - Edward Abbey, “The Monkey Wrench Gang”.

I first read this book when I was in high school, it has become somewhat of a family icon since then.  The license plate on my Jeep reads “BEYOND2”, my brother’s 4-wheel drive vehicles follow suit in honor of Seldom Seen Smith’s river running business “Back of Beyond Expeditions”.  I credit that quote for my fascination with ghost towns and abandoned buildings.  It probably has something to do with why I bought my tiny 100 year old home instead of a brand new one in a subdivision where I could have got a much bigger house.

Last night we were looking through my older brother’s new house and found some pictures in the garage.  The original owners haven’t completely moved out, so all I could take were pictures of the pictures.  Here are the three pictures they had of the Glen Canyon Dam being built.  The dam that created Lake Powell, that covered Hite, Utah in water.  The dam that G.W. Hayduke, Seldom Seen Smith, Doc Sarvis and Bonnie Abzug longed to blow up.

And any other English teacher that stumble upon my corner of the web.

It's getting to the point if you accessorize your Jeep you have to weld them on and even then they might be able to still steal it. I hate these junkie thieves they sliver around like they are in titled to your stuff. What ever happen to being ashamed of yourself doing things like this ? Way to many folks walking around doing whatever the hell they want with no shame or fear of any consequences.

I’m hoping this was written rapidly in a fit of passion, but even so, calm down and re-read it before posting, eh?

Goes by fast.
It's hard to believe that I've had the Jeep for one whole year.

And I'm still lovin' it.  Shoulda got a Wrangler years ago...
Spewed forth by Max Sartin at 7:29:00 AM 2 backlashes Ideas: Jeeps, Wrangler

Yeah, he’s not the right guy for the job.

Re: Teachers at the recent rally supporting the Governor's 6.25% funding request for education:

"It reminded me of when my kid was 3 years old and they started crying on Christmas morning because he didn't get one more thing."

Paul Mero of the Sutherland Institute?

Dude, you need to read the book “How to make friends and influence people.”

Spewed forth by Max Sartin at 12:32:00 AM 2 backlashes Ideas: education, rally

And since it includes the time, it happens twice today.

An evening at the Capitol Building

The rally was great.  The Capitol Rotunda was packed and there were people lined up two deep all along the second floor, and most of the third, and people were still showing up as the rest of us started to leave.  The energy was amazing.  Now, on to the pictures including a bunch of the better hand-made posters.

Now, we get to see if it did any good.

A morning at the Capitol Building

The brother of a friend of mine is one of the few Democratic Senators in the Utah State Legislature, Senator Gene Davis (D-District 3).  Today we went up to the Capitol and got to sit right on the Senate floor.

Here I am with the Senate in the background.  The picture below shows the bench we sat on (that’s my friend on the bench.

It was a very interesting and informative couple of hours, watching them debate and vote on bills.  At one point Sen. Davis called for a “personal privilege”, where he got to introduce to the entire Senate the two visitors he had there (me and his sister).  I have to admit it was pretty cool having my name and occupation said out loud to the entire Senate.  that’s him in the picture below.

There was a somewhat heated debate over a bill having to do with the unincorporated areas of Salt Lake County.  It was fascinating watching two Senators go for each other’s throats in an incredibly civilized and respectful manner.  And the political manipulations that led to the bill being shelved for another day, without an actual vote on the bill, were eye opening.

During the debate on another bill, Senator Howard Stephenson (R-District 11) questioned some lines in the bill.  He went on for almost a minute before someone informed him that they had already been removed, and although he didn’t say it, he had that look on his face:

All in all, so far it was a great day.  And I’m headed back up there this evening for a Pro-Education rally.  I’ll let you know how that goes.

Oh, and here’s a picture of where the Senators wash their hands after they pee.

Can you see it?

The latest thing I did to the Jeep?

Since I hate those Facebook pages that don’t tell you what you are supposed to find, I’ll tell you.

I painted the rocker panel; look just below the door.

I put the step bar on to help protect it from sliding up against rocks and stuff, but I decided to paint the rocker panel with truck bed liner to protect it from rocks being kicked up.

As usual, first try didn’t work out perfect.  I had it well taped up, covered with newspaper, so overspray wasn’t the problem.  That happened when I pulled off the tape – the truck bed liner is a plastic coating and the tape pulled it off in a jagged line:

Being all annoyed at the imperfections, I contemplated what to do to make it look right.  Agonized over it for an hour or so, and then came up with the idea to use regular paint to blend from the truck bed liner to a nice straight line.  I think it worked:

I think it looks good now. 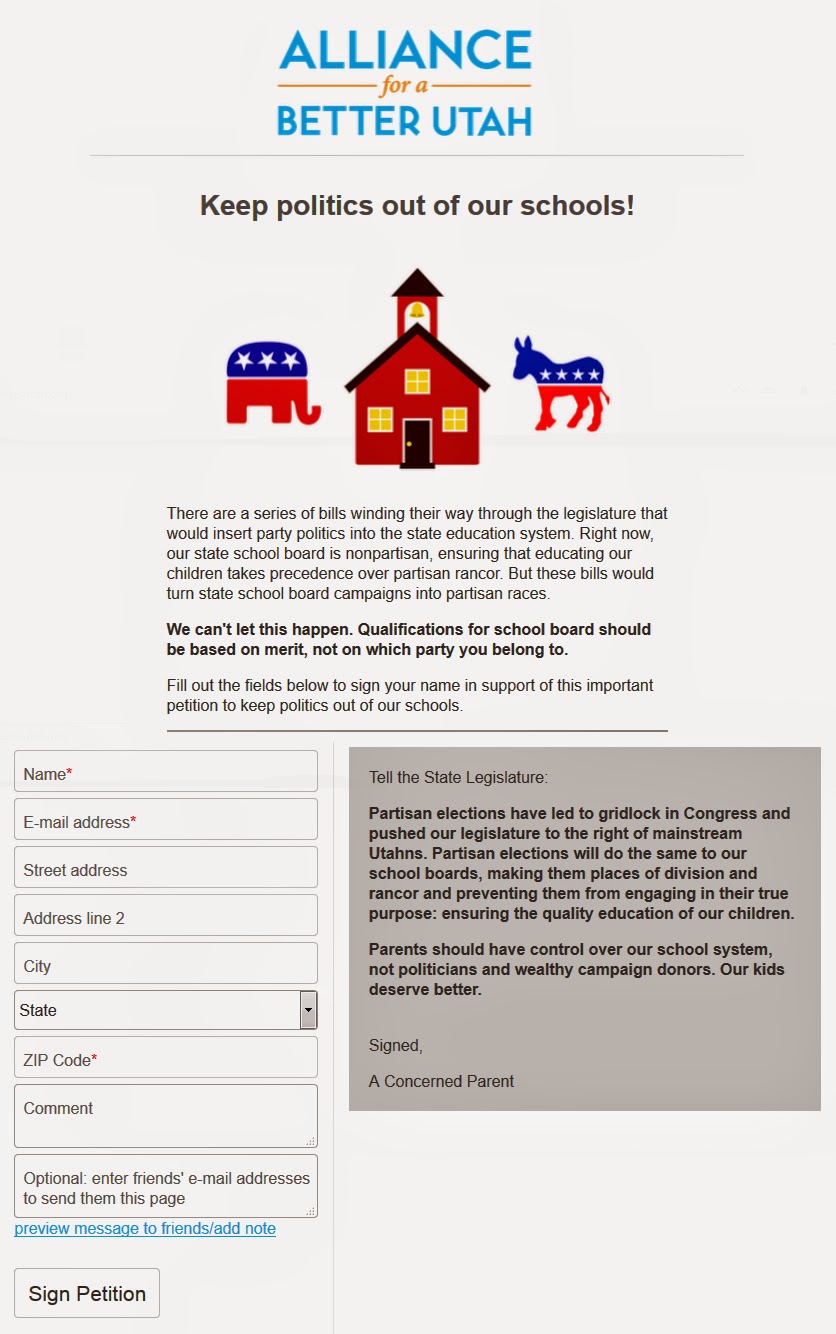 Another Rally at the Capitol

For anyone who is worried about the state of Public Education in this state, and the valiant effort our Legislators are putting for at dismantling it,


There will be a Pro-Education Rally at the state Capitol next Monday (March 9th).

Everyone who is concerned about the fate of Public Education in Utah is encouraged to join us up there on
Monday, March 9th at 5:30 pm in the Capitol Rotunda.

Plan on getting there early and parking far away - or take TRAX downtown and then just walk up the hill.  I've been to several rallies at the Capitol and they can be very interesting and amusing, and:

The more people that show up the more the Legislators will understand that the bullshit they are pulling on Public Education will not be tolerated.

Please be there if at all possible.