Lisa Shafer and I headed out to Antelope Island today.  Neither of us remember ever being out there in the winter, so we decided to go see what we could see.  Not as much scenery as we’re used to, mainly because there’s a big inversion over the valley locking in the clouds and pollution.
Can you tell where the water ends and the cloud starts?

And there’s the bunny.  It was so still that at first I thought it was a funny shaped rock.

Even when I got to within a three feet of it, it still sat there still, resting on the rock.

I got about two feet away and it ran right into the bush.  I went around to the other side and spotted it right back on it’s rock.  That rabbit really loved that rock.

Usually you can find the bison when you get about a mile in on the island, but today we had to get 5 or 6 miles in before we even found this small herd of them – about 1/10 of what you can see in the summer.  Wonder where all the rest went?

Seems there are also coyotes on the island.  I knew that, but had never seen them before.

And finally, a crosswalk out in the middle of nowhere.

Here’s the crowds that I braved on Black Friday.  I didn’t get any good deals on merchandise, but I did get relaxed.

And the cat had the right idea too…

Spewed forth by Max Sartin at 9:24:00 AM 2 backlashes Ideas: Alan and Denny, Black Friday, Jeeps, Wrangler

What am I thankful for?

Hope you all have a great Thanksgiving, and a whole lot of stuff to be thankful for.

I’m thinking of painting my Jeep this color.  Yeah, just kidding.  Pepto Pink, in my opinion, is not a good color for any car.

One of the most ironic typographical errors.  Or was it intentional?

French Club meetings at my school are taking an odd turn.

There’s an app for everything, and one of my students had fun with this one and a picture of me.

Miss Utah visited my school for a 7th grade assembly today.  The boys were, well, um, just a little bit happy.  She signed their arms and took selfies with them.  They, of course, had to show me at lunch.

I haven’t had my hard top on since I bought the soft top at the end of April.  Today I gave in to winter and put the hard top back on.

I'm dreaming of a brown Christmas...

This was the the temperature the Jeep was telling me it was on the way home from work today. 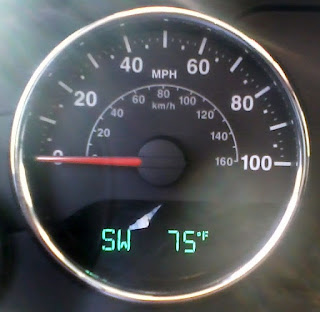 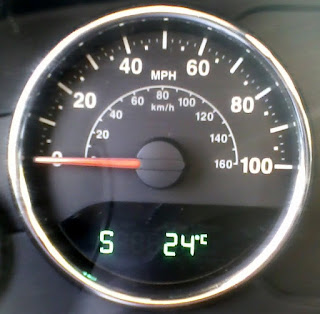 Knowing it was November 2nd, at first I thought the Jeep was having a little fun messing with my mind, until I realized I was driving with all the windows down and the soft top folded back.

Spewed forth by Max Sartin at 4:33:00 AM 0 backlashes Ideas: halloween

Don't know my own strength.

It's funny how we get used to imperfect things when they decay slowly enough. Unit it finally breaks and you replace it.
I had to replace the wheels on my shower door today. I hadn't noticed how much harder they were to open and close, until I took a shower with the new wheels. Almost pushed the door into the next room.
Spewed forth by Max Sartin at 7:14:00 PM 2 backlashes Ideas: home repairs

Four the english teacher's out their:

Went camping down by Goblin Valley again this weekend.  Found the same awesome campground that we stayed at last year, it was even empty but we decided not to stay there.

The only way to it, and back out, is across a dry wash.  Well, dry most of the time.  Oh, it was dry(ish) when we got there, but the National Weather Service issued flash flood warnings for the area.  We would have been fine in the campground, but with the possibility of getting stuck there, we decided to find a different place to camp, right on the other side of the wash.

We were going to stay until Sunday, but decided to come home Friday night.  Sitting in the tent/camper in the rain didn’t sound like much fun, and packing up while it was raining even less like fun.

The day we were there was great.  Relaxed, hiked, played in the mud that was there.  That’s the problem with planning a trip in advance, the weather doesn’t always cooperate.

We also rediscovered an old find.  On the way home we stopped in Salina for dinner, at a little café called Mom’s Café.  The food was great and at a good price.   The people there were great, just your basic down-home service.  Josh’s steak was awesome, Dylan said his grilled cheese was the caliber he dreamed of (ok, he is only 11, but the one he had in Hanksville went uneaten).

If you’re in Salina during meal time, I’d suggest trying it.

I didn’t think it was possible to have any less respect for a Utah politician.  I was wrong.

Spewed forth by Max Sartin at 9:13:00 AM 1 backlashes Ideas: Politics, propaganda

In the desert–when it rains it floods.

I was headed home from grocery shopping, saw some cool cloud formations and decided to stop at Sugarhouse Park to get some pictures.

I also got this shot of a dad and his kid sledding down the hill.  Seems that wet grass can be as much fun as snow.

Then came the parade of cars driving the wrong way around the park.  I’ve seen this before, so at first I just thought it was some moron who thought their 2 minutes was more important than the safety of others.

But around the 4th car, I decided to go see what was going on that was causing all this anarchy.

Well, I got about 3/4 the way around the park and found out what was turning everyone back.  The creek running through the park was overflowing and flooding over the road.

It really wasn’t that deep, but recently in a small town on the border of Utah and Arizona an SUV and a van were swept down by a flash flood.  12 kids and adults were drowned, I can understand why people weren’t too anxious to forge through the water.

Although the ones that did cross had no problems at all.

It rained less than 1/10” in the city, maybe up to a quarter inch in the mountains.  But since all the runoff from the mountains get funneled into about a half dozen creeks going through the city, and it came down quite quickly, they tend to overflow and run out into the streets.  And the water can get moving pretty quickly.

I spent about a half hour walking around the park taking pictures and by the time I got back, the water had already ceded.  You can see how high the water got, where it pushed the leaves up to a line on the lawn.

And finally, it decided to rain on me again as I was heading home.  Even a little bit of hail to boot.  But, as typical here, it didn’t even last through the light I was stopped at.