Saw this bumper sticker the other day:

Spewed forth by Max Sartin at 1:13:00 AM 5 backlashes Ideas: Politics

I went to Best Buy today around 10:00 to pick up some ink for my printer, only to find out that they don’t open until 11:00 on Sundays.

While I waited for them to open, I spent some time at Murray Park and found a bunch of very active ducks.  Much movement.  Of course I had my camera in the car, and of course I got a bunch of pictures of them.  Here are some high-movement duck pictures from today.

If only all those financial documents came on tissue paper, I’d never again have to spend time shredding them.  Just leave them in a box on my desk and the cats would take care of them for me.

This is what happens when I forget to put the kleenex box back in the desk drawer before going to bed or work.

Spewed forth by Max Sartin at 10:54:00 AM 2 backlashes Ideas: Alan and Denny, shredder

“I don’t really want to be here today, I’d rather be at home in bed…(pause)…petting my horse.”

I think the pause was actually a barely audible “or”, because he really does have a horse, and a yard big enough to keep it at home.

Saw this as one of my student’s backgrounds.

Spewed forth by Max Sartin at 8:04:00 PM 2 backlashes Ideas: Politics

Students.  I’ve always argued that if we could harness their energy we could completely eliminate our energy carbon footprint.  Here are a few of the things I have been involved in that were used to direct this energy.

Some sort of Marco-Polo teambuilding game we played on the Green Team.  I really can’t remember exactly what the activity was, but I do remember that it was my first year at that particular school.

Hot air balloons.  The kids designed them to be as durable and to go as far as they could get them to.  This was a science class activity that the whole team did, at the same school.

Here the science teacher is teaching the kids about mass versus weight.  Actually, again, I don’t remember the specifics, but this was an after-the-lesson activity.  I only taught at this school for one year, but since my classroom was right next to hers, you can probably tell I had a fun year.

This was during lunch, but this kid had some good basketball moves.

We were “The Farmers” at the high school I taught at.  It opened up in 1906, when South Salt Lake was mostly farm land, and as you can see, a few of the traditions remained from that era.

I got to teach Psychology at the high school, and one of the more fun activities was when the counselor got her father, who was professionally a polygraph technician, to come in and polygraph willing students.   They weren’t supposed to move at all, but you should have seen those needles move when they lied to a question.  (They were told to lie on a couple of questions and see if he could tell).

Halloween jack-o-lantern contest gone wrong.  Nah, that was the reward for entering, you got to throw your pumpkin off the back of the bleachers.

For many more Movement photos, click on the banner.

I now have pdf files of the W-2s, the W-3, all 4 quarters of 941s and the year end 940.  Yesterday I installed the new payroll program and recreated the one pay period that I lost in about 2 hours.  Everything is back as it should be.

Oh, and did I mention that I now have 3 back up copies of all my payroll information?  Yup, if they all crash at the same time, I’ll just give up, but for now all is good.

One of my driving pet peeves…

Especially when it’s on the freeway, by the off ramp and the schmuck is blocking the flow of traffic.

Spewed forth by Max Sartin at 9:10:00 AM 3 backlashes Ideas: schmuck, traffic

Computers suck.  We rely on them heavily, and then they just break down, out of nowhere their hard drive crashes and we lose everything we’ve got.

Then we became smart enough to keep a backup of our important stuff.  Now we’re safe, if either goes bad, we’ll still have one copy of our information.

Until two hard drives go belly up within a week and a half of each other.  Which, you all probably know, happened to me this month.

Well, yesterday I got the call from the Geek Squad™ that they were done retrieving the information off my original backup drive.  I went down there to pick it up and find out how things went.

They told me that they were able to save some 590GB of the 620+GB that was on there.  The disk went down in flames before they could get the rest.  I headed home fearing the worst, that the missing 40GB was the REALLY important stuff.

I got home, plugged the new 3TB hard drive into the new computer and waited for it to install the driver.  Then I started going through the stuff they had saved.  I was looking for a folder named “MyEverything”, which had all my financial information and all the information for the payroll I do.  It was there, completely intact.  All I lost were pictures, which have their very own hard drive which was not a part of the crash of 2012.

So, all I ended up losing was the stuff I did between the backup hard drive crash and the computer crash.  The week that I printed the W-2 forms and their first payroll of the year.  I’m going to have to recreate the end of the year stuff and re input all the employee data, which will take a lot of my weekend but at least all is not completely lost.

With the original photo hard drive, the first new backup drive and the second one I purchased to have the info transferred onto, I’m now going to have three (3) backups of my vital information.  And I set up my backing-up program to automatically back up everything every day, in the wee hours of the morn.

Now the big question is: Can four hard drives crash simultaneously?  Because I’m not going to wait a week next time to go out and get a replacement for a bad hard drive.  No way.

Spewed forth by Max Sartin at 9:34:00 AM 5 backlashes Ideas: computers, crashed, hard drive 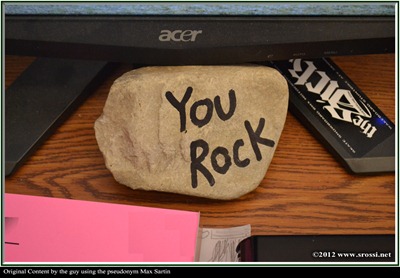 I got this when I taught at the high school, the PTA gave them out to all the teachers.  It still sits on my desk.

Today after school four seventh graders were hanging out in my room waiting for their ride.  One of them saw the rock and said “That’s cool, it says ‘You Rock’ on that rock.”

Then he saw this, (which I got for being a new member of the faculty at the school I’m at now) 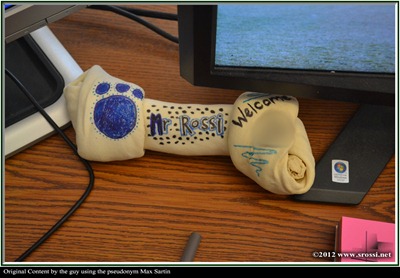 and asked “Does it say ‘You Bone” on the bone?”

Now, my first thought was that it was intentional.  I looked up at him, preparing to say something about inappropriate comments in my classroom.  Not even a smirk, not even a twitch at the corner of his mouth. And his three friends who were close by didn’t even flinch.

Now, at this point it took every ounce of my self control to keep from breaking out in laughter as I picked up the bone and pointed out to him that it just said “Welcome..”, and the conversation continued like no double entendre was uttered.

About a week ago my backup hard drive went on the fritz.  Wasn’t working, so I couldn’t keep backing things up.

Yesterday, as I was starting to back things up on my brand new 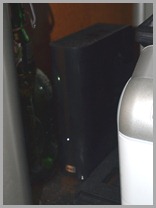 backup hard drive, my computer died.  Completely fried the hard drive.  Great.  Lost. Everything.  Well, except for my pictures, which fortunately were backed up on a third hard drive.

I took the computer down to Best Buy and talked to the Geek Squad.  He checked it’s hard drive and gave me the bad news, completely kaput.   I asked him if there was any way to get the information off of it and he told me that it was still possible, as bad as it was, but that it would entail sending it off to somewhere, that it would have to be completely disassembled in a controlled environment.  Then they might be able to get at the info.  Cost?  $2,100, or more.  (Blood pressure spike). 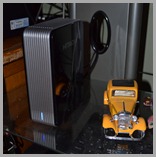 So I went home, got the old back up drive and brought that down.  With my heart pumping at a million beats a second I waited five minutes for him to check it.   First good news of the weekend – he could get at most, if not all, of the information on that one.  (Blood pressure returns to normal).  Not the $2,100, but I did have to shell out $200 for a new 3TB hard drive and the $99 recovery fee.  So with the new 2TB back up drive I already have and the one I bought for the transfer, I’m going to see if 3 copies of everything will be sufficient.

Unfortunately, the information is a week old.  A week which included year-end files for the pizza place’s payroll, their first payroll of the new year, and some work I did on book covers for my writer friend, Lisa Shafer.  (Sorry Lisa, we’re going to have to start over again, though I will still have the files I had when you came over this weekend). 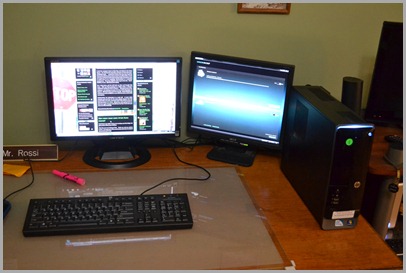 And then I had to spend another $700 for a new computer.  It is a lot faster than that 5 year old one I had, but I still had to spend a bunch of time re-installing programs, and I’m not even done yet.  Bleah.  Oh, and it does have the hookups for dual monitors, which you can see in the picture.  As I write this, it’s in the process of backing up my photos, and all the new stuff on this computer.

How about some more After Dark photos?

I took these one night as they were moving a pre-fab bridge into place where I-80 crosses 7th East.

This first one is in Fairmont Park.  That’s me and my evil-twin brother.  Or maybe just a 30 second shutter shot where I switched places half way through.

This bridge was already in place, where I-80 crosses Highland Drive.  As you can see, they weren’t quite done with the underneath work.

Just north of the freeway is a Utah State Liquor Store.  The only alcohol you can buy at a grocery store in Utah is beer, and 3.2% alcohol beer at that.  All other bottled alcohol must be bought at a State owned and run liquor store, and that includes wine-coolers (alca-pop as they call it).

Looking north on Highland Drive, from right next to the Liquor Store.

The bridge at 700 East being lowered into place.  It was build where the off ramp was, while traffic still continued on the freeway, and then moved into place in one day.

I’d hate to be driving I-80 west and end up on that bridge.

The next three pictures are the exact same shot, just with different shutter speeds.  They were taken facing north on 7th East, facing the opposite direction from where I took the pictures of the bridge being lowered.

Spewed forth by Max Sartin at 7:02:00 PM 6 backlashes Ideas: After Dark, Thematic Photographic